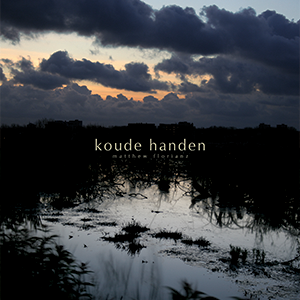 ... I don't seem to want to leave those familiar surroundings that inspired Maalbeek, GrijsGebied and really all of my music. When I thought to have discovered everything about that place, it surprised me with this new find ..."

Koude Handen was recorded between December and January of 2009/2010. The album's unique sound is a result of Matthew's approach to creating music. He uses only one Korg manufactured synthesizer and supplements those sounds with environmental recordings.

Koude Handen has presented Matthew Florianz with a unique opportunity.

"... only ten years ago, the compact disc was the medium of choice to distribute music. I am a collector, I "want" my music on a medium which requires time, anticipation and effort to obtain. As important as that is to me, the advantages of digital distribution cannot be ignored.

Digital content distribution takes away the overhead and cost of traditional distribution. It allows the release of music in a better format and can present it in native 24 bit resolution...

Koude Handen, recorded in December and January of 2009/2010, sees Dutch composer Matthew Florianz continue on the sonic path of atmospheric landscape ambient as explored on his album Maalbeek.

Mr Florianz once again used his trusted Korg X5d synthesizer, of which he blended the calming, spacious textures with environmental recordings. The environmental soundscape journey presented here is one of calm, wonder and fascination.

Matthews well crafted, soft and smooth textural musings with cinematic depth never become the least uninteresting despite its length nor its strong minimal approach and form.

Putting on Koude Handen evokes and even deepens the outdoor feel found in his previous releases, again expertly "shifting between a state of illusive imagination and existent images" as sound layer by sound layers is peeled off or built upon another.

Welcome to the beauty and stillness embedded in (imaginary) landscapes, thats what Koude Handen seems all about.

De Meinweg is a National Park on the border between Germany and The Netherlands. An abandoned railroad, overgrown with plants and trees crosses through it. Called the "Ijzeren Rijn" (The Iron Rhine) it was used to transport coal and goods from Antwerpen (Belgium) towards the Ruhrgebiet (Germany).

Matthew's fascination for trains and railroads resonated; "... ever since hearing about this abandoned railroad I wanted to visit the area. It was certainly inspiring to walk in those woods and seeing the rails all but disappear in tunnels of dense foliage ..."

The environment was sampled in sounds and photographs. The recordings became part of the album Koude Handen and in turn, musical elements from the release have been used to create this impression:

A series of still photographs set to music and ambience's taken from the album Koude Handen by Matthew Florianz.

Wakker is the Dutch word for Awake.