"... florianz's work is completely unrushed and slowly and deliberately unfolds and expands at just the right pace ... "


biography<
Matthew Florianz, born in the 1970's to a Dutch Mother and Austrian Father, is an explorer of ambient environmental soundscapes. His music evokes an outdoor feel, his album shifting between a state of illusive imagination and existent images.

Matthew's first musical experimentations started in 1994. Initially using only midi and a computer sound card, these recordings were shared with a small audience of friends. On the subject of releasing such earlier works : "... most of it was practice; finding style, tone and notes, it was really rather derivative of the music I liked and looking back at it now, a necessary learning to figure out what kind of music (if any) I could create ...".

Albums such as *.wav or Shapes Rooms Environments represent collections of recordings and experiments that have never been released. They helped establish Matthew's signitature almagamate of field recordings and instruments. They are the blueprint for the releases that followed: "... I don't play anything well really, so to me everything is treated as source, recorded to be manipulated in the studio and dissolved into a coherent soundscape ...".

Sprook (1999) is the earliest release that is still available and builds on the earlier experiments. Released on emergent on-line services it attracted the attention of composers Darren Scott and Gene Williams. The three meeting in person at an evening of ambient music performances in the Dutch town of Utrecht where Gene and Matthew played a 45 minute set with Darren providing sound reinforcement and mixing.

Afterwards Darren presented his intentions to start a record label and approached Matthew to release Sprook but instead an entirely new recording was chosen and in 2001, GrijsGebied is the first release on the new founded non-profit label: h/s recordings.
Gene Williams, in whom Matthew recognized a peer and mentor; mastered and contributed to the album and has been a frequent collaborator. His music can be found under the pseudonym Mindspawn.

Darren Scott released several Florianz albums on h/s recordings while sharing his own music under the pseudonym of Ganzfeld.

GrijsGebied (2001) was a success and reviewed as "... a classic ..." and "... masterpiece of contemporary ambient ...". It received air time on the prestigious BBC Radio 3 program, Late Junction and GrijsGebied earnings were fully invested in h/s recordings to enable to release of music from various artists.

Five Florianz albums and three collaborative recordings have been released on h/s recordings. Molenstraat (2001), which was recorded in one take with good friend Erik t' Sas was a best seller while GrijsGebied re-printed in 2003. Frequent musical collaborators in this period include Tatiana Brainerd, Bill Brisette, Stan Linders, Joris de Man, Erik t' Sas, Oscar Stegehuis, Darren Scott and Gene Williams. The label has since been disbanded.

In 2005, Matthew's professional career in game audio starts on The Chronicles of Spellborn, a computer video game finally released in 2009. Matthew has created over twelve hours of music and ambiences for the game, which has been lauded for its achievements in art and sound, provoking an "... evocative twilight feel ... "

Matthew has since worked on several more games, including the award winning iPhone game Star Defense, which features atmospheric ambiences for the game's beautifully designed planetoids. The audio is mentioned specifically in reviews: "... adds atmosphere and tension ..." and one review prints "... the best I have heard in an iPhone game ..."

By 2010 the landscape for releasing on CD is changed. Smaller labels, essential for distribution and manufacturing, began to feel a punch and although all previous released sold well enough to break (even finance the releases of other artists) it was the looming loss of distribution that necessitated change. Koude Handen releases in 2010 marks the departure from physical media and switching to online distribution. Los (2011) from the beginning had a online release in mind and was recorded at a much higher resolution. It is the first release since The Tone T(h)ree (2000) that does not include any environmental recordings.

... Though this is 100% electronic music, Matthew Florianz's music always has a close relation to nature, conjuring landscapes that could be real as well as one from your dreams ...

To further his professional career in game audio, Matthew left The Netherlands and moves to the UK to work on the Playstation Vita game Tearaway. Followed by a senior sound design role working on the successor of Elite called Elite: Dangerous and as a lead audio designer on Planet Coaster in 2015. His career in game audio led to working on Jurassic World Evolution (and meeting childhood hero Jeff Goldblum), Planet Zoo, F1 Manager 22 and Warhammer Age of Sigmar RTS. By 2022 he has assumed the role of Head of Audio Design.

The move the Uk and full time game audio work cause a gap in releasing recordings during this time. In 2015 Matthew re-released a 2008 created album Tauern in a revised edition, dropping some of the rhythmic elements and replacing several tracks entirely. On Bandcamp (in 2022) it is his best-selling release. In that same year Matthew also contributed music to a series of short documentaries about Science's unsolved mysteries, the music, written specifically for each episode, is on Bandcamp as Nocturne

After a gap of 5 years, Wasteland Signals (2016) is another full length album release. It follows those "... windswept ..." ambiences of Los (2011). It revolves around themes of loss and letting go.

onontgonnen (2017) translates to English as uncharted, unexplored, remains though the translation misses out on the the staccato rhythm of letters and shapes in the original Dutch wording. The album titles are based on workings and properties of chemistry and feature many recordings of water and fluid substances.

... what struck me on this album was its complete unhurriedness, the way it made me lose all sense of time. It feels as if the 60 minutes of onontgonnen comprises a history of thousands of years. And yes - that feeling of timelessness is a quality of true ambient music. There are many great albums in Florianz' discography, but with its harmonious balance this is one of his very best! ...

mass object (2019) is a departure of sorts, and not just because it's a sci-fi story. Loosly inspired by the dreamlike Solaris, a 1972 Soviet science fiction drama film based on Stanislaw Lem's 1961 novel, co-written and directed by Andrei Tarkovsky. The album features electromagnetic recordings, a 30 minutes sound design suite and a host of new synthesisers as Matthew expanded his studio for the first time since aquiring the Korg o5r/w in the 90's. New instruments include a Korg Prologue, an analogue synth that mirrors the trend of riviving classic synthesis as it existed before digital and FM based synthesisers became dominant in the 80's.
mass object is the first release that doesn't feature Matthew's own artwork. The striking circular shape, hanging over an undefined landscape created by concept artist Ian McQue.

zon der tijd ver gaat (2020) is a recording made druing the global covid-19 pandamic. For several months, Matthew recorded music every week. Often starting with a synth and a sequencer, these pieces are layered and edited together presented by Sunday. It is a way of working, with very quick turnarounds and many layers played "live". This way of working changes an album that Matthew has been working on since mass object released. "... it was a time of introspection and quiet in large parts of the country. In my city, for a few weeks, nature exploded, with animal noises not normally heard and new smells in the air not drowned out by cars. Working on a track per week, without really thinking about direction or having time to go back and tinker, was freeing. It reminded me of the early 2000's and playing live with friends. It interrupted the direction of an album I had started and ultimately influenced it too ...".

mist schimmen (2022) (missed figures / mist shades) is a soundtrack to a place: "... a memory and nostalgia for a time in which I have created all my earliest album. Molenstraat, Electronic Forest, Grijsgebied, Three, Niemandsland and Koude Handen ...".
In a way similar to 2008's Maalbeek, which looks back and captures memories of a forest region in the south of The Netherlands where Matthew lived from mid 80's to mid 90's , mist schimmen is inspired by a time of living in The Hague from 2000 into the mid 10's. It's full of the city's iconic sounds, such as the reverberating pneumatic hammers, that push giant concrete columns into the ground. These are heard on laat al zo lang (late be for long), the fourth track on the recording. 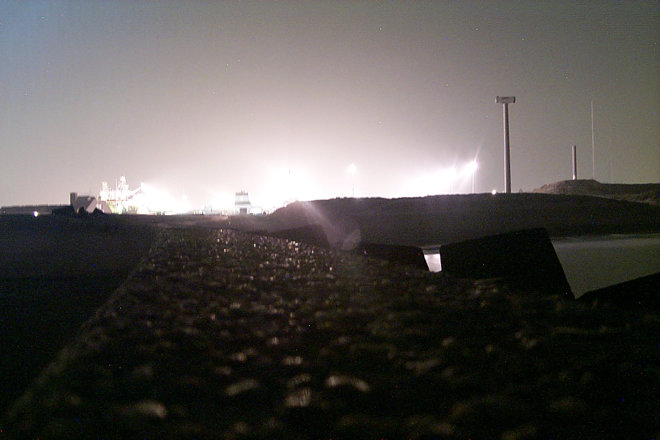 The opening sounds of mist schimmen in the track haven light (harbour light) are captured between hundreds of square concrete blocks that line and protect the iconic harbour entrance from the sea (see image above, silhouette to the right) : "... It is a statement about the capricious nature of the album: Concrete squares (rhythm) break the chaos of the sea splashing between them (noise). In that space between, something new in the form of a tonal perseverance is created. In all its simplicity, it is an analogy for how I create and approach music and sound design, exploring the space between to find interesting sounds ...".

The album is released as a limited edition CD (pressed) and Download. Both are available from Bandcamp.

unreleased
morphine for the mind

ltd. edition release
three
with bonus cdr of album self