"... florianz's work is completely unrushed and slowly and deliberately unfolds and expands at just the right pace ... "

Listening to Maalbeek is like hearing the soundtrack for a car crash in slow motion. You can feel the metal slowly folding, the small pieces of machinery flying in the air. The strips of steel, the screws, and the small turning wheels with their glistening teeth puncture their way through the atmosphere. Glass creases to an unnatural angel and shatters and blasts like a myriad of strangely solid raindrops falling backwards into the sky. Tires erupt softly, with grave baselines, in a rhythmical manner they eject tiny pieces of dark rubber on the ground. A structured form, blessed with mechanical meaning and function, transforms into a new shape. Into material art. Softly and subtly, into a dream of destruction and freedom until there is nothing recognizable left except substance itself.

Sure, Maalbeek is probably really based on the itinerary of the Dutch stream with the same name and I can imagine the ambient, rippling sound of Matthew Florianz' record being a great soundtrack for the movement of water at night, under a sky full or stars and void of any moon. Or perhaps it has more to do with the blank practicality and beauty of letters used as symbols in the Schemer programming language. Parenthesis, word, number, space in a language of uniformity and truth.
Or better yet, Maalbeek maybe simply portrays the sound of the mists in the darkness of the Schlucht. The calm of the shadows surrounded by other shadows. The lack of any restlessness in the homogeneous shadows, parted only at times by the innumerable droplets of water that are held in a low cloud. Maybe it's the languid sounds, the almost imperceptible synths, the sometimes pulsating bass. Or perhaps it's the surreal and detached ambient.

Matthew Florianz, after all, is no beginner. He started composing his trademark atmospheric music in 2001, and since then has released more than ten records, with Maalbeek being his last yet. He works under no pressure, through his H/S Recordings, a small self sufficient label which seems to give its ambient, experimental and downtempo artists enough breathing space to create music of beauty and calm. It is extremely difficult to transform the immaterial into sounds. It becomes even more improbable that anyone can express this transformation into words. I have tried. 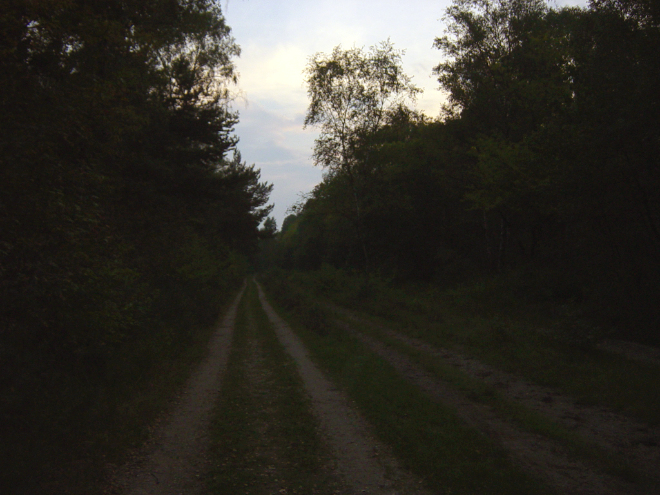 I would choose to classify the music of Matthew Florianz as ambient traditionalist or rather, "originalist", in the sense that he maintains an unsettling, sombre tone throughout his work, restricts his palette, and like Brian Eno and Harold Budd before him, creates atmospheres and "landscapes" hitherto unheard and only possible to visit through sound. Shut your eyes and you shall see.

Like his earlier albums, Maalbeek evokes someplace where no one else is - and it is a place that is vast. It is a place where the sun is always hidden by cloud, without vegetation, smoothed over, leaving space for your own imagination to wander. Your imagination becomes your avatar in this strange land. To create this very special feeling of comforting desolation he uses synthesizers and piano, but never anything resembling a conventional melody will decorate the landscape as his fingers grace the keyboards.

As fine and consistent an artist vision as you can find. 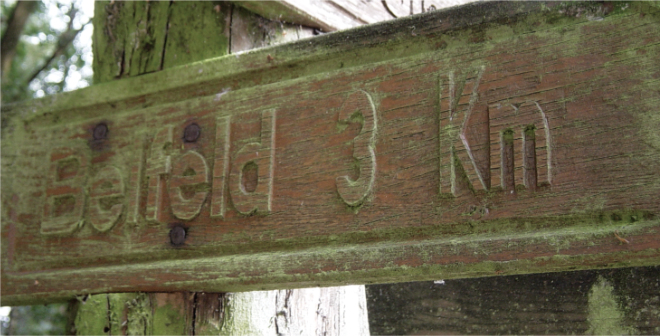 Years back, I got to know some of the fine crafted ambient music of The Hague-based musician Matthew Florianz. In 2008, he released the concept album Maalbeek, which again shows his great talent of painting slow morphing, highly atmospheric landscapes.

Named after a forest area near the Holland/Germany border, the uninterrupted music found on the six tracks is classic minimal ambient, slowly but surely unfolding and expanding its spaciousness.
The output of Steve Roach comes to mind when hearing the opening track Belfeld , but after that, Mr Florianz starts digging into vast, dense and clouded sonic territory in which only artefacts of Budd and Eno can be noticed.

The gentle and smooth fading of the intense free form textures within the imaginary and carefully rendered ambient musings is eminent, as is a strong sense of remoteness embedded deep within. For me, introspectiveness and atmosphere are the key elements in Maalbeek, which rises to beautiful heights on the 15-minute Spiegelend.

This headphone music surely and truly triggers the imagination and the senses when you open up to it. To do it justice, this environmental soundscape journey is best experienced at night time or during quiet hours with eyes closed to immerse (or submerge if your like) in its full impact and intrinsic beauty.

This excellent produced gem is your one-hour ticket to neverland, and a must-have for any ambient fan. 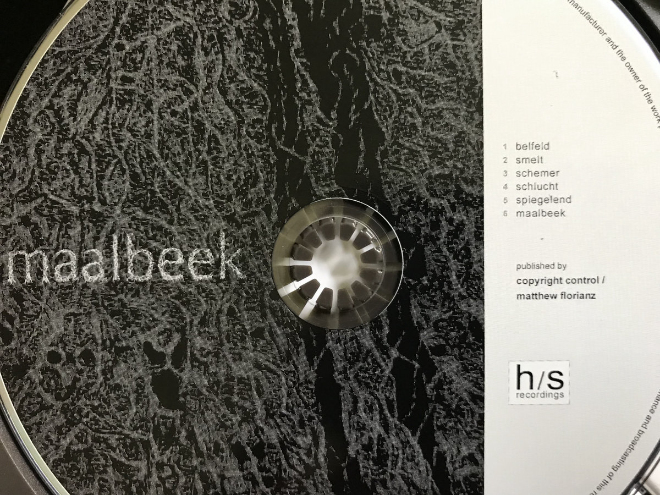 (03.09.08) Maalbeek is Matthew Florianz's latest release on H/S Recordings. Taking its name from a wooded area that straddles the Holland/Germany border, Maalbeek is a place that Florianz visits often to walk and absorb the natural beauty of the diverse range of colours, atmospheres and foliage it offers. As the primary influence for this album it is considerably more minimal and ambient than the moody complexity of Niemandsland before it. Even the artwork is taken from a rediscovered drawing from 1997.

One of the beauties of Florianz's work is the way that it is able to create intense moods and atmospheres from beginning to end. Often, Florianz will record his albums on location, whether that is on a windswept shore (Openstage) or the relative safety of an apartment building (Molenstraat). Recording his music live and often improvised on location lends a whole new level of environmental awareness to his recordings and, although Maalbeek is not recorded in this way, it bears all the hallmarks of Florianz's ability of translate the mood and feeling in his mind into music for others to experience. Maalbeek itself, like all of Florianz's work, is completely unrushed and slowly and deliberately unfolds and expands at just the right pace. Belfeld, the opening track, is so wonderfully serene and languid that you can feel the cool water lap around you as you float effortlessly downstream without a care in the world. At other times, the mood is slightly more anxious, windswept and melancholy; Spiegelend for example. Even then, Florianz's work has an undeniable serenity to it, almost considerate and comforting as if sharing an experience. Another aspect of his work is that it comes across as intensely personal, almost as though he is indirectly sharing his innermost thoughts and experiences by creating moods and sonic imagery to relay those feelings and share them with his listeners in a giving and almost therapeutic way. Maalbeek however is less intensely emotional than some of his previous works but purveys a sense of calm, control and composure that the quiet beauty of isolation in a forest might bring. He does this through layers of floating, almost orchestral synth tones that gently flood the senses with an air of tranquil, spacious serenity. By its close, Maalbeek gently drifts away, steadily becoming quieter and slowly fading away until it is gone completely.

Alongside the Maalbeek album, H/S Recordings has funded a professionally produced CDR release entitled Drie exclusively as a thank you for those people who purchased the Niemandsland boxset, essentially financing the release. Seen by Florianz as the last in an arc of releases encompassing Self, Three, Niemandsland, Jaren and Drie itself, this album is generally in keeping with the ambient atmosphere of Maalbeek but more reminiscent of Florianz's previous works in being drone based, considerably darker and more ominous in mood. Clocking in at a fraction over an hour and covering nine tracks, Drie is a full album in its own right, building in mood as it progresses. Taking the listener on a journey from shadowy rumbling dronescapes through glistening radiant tones and on to dark swathes of drifting sound, Drie may be dark and desolate but it is also strangely comforting and possesses an uneasy sense of calm.

Although not particularly prolific, Florianz makes each of his releases count by keeping a close ear on quality control. Each of his albums offers him a new sonic canvas on which to translate his sonic imagery and he never fails to produce the best ambient music he can offer. Florianz is a master of intense environmental ambient music that can make great background music but is only truly appreciated with focused listening in seclusion, preferably with headphones, where it can be given the attention it deserves. 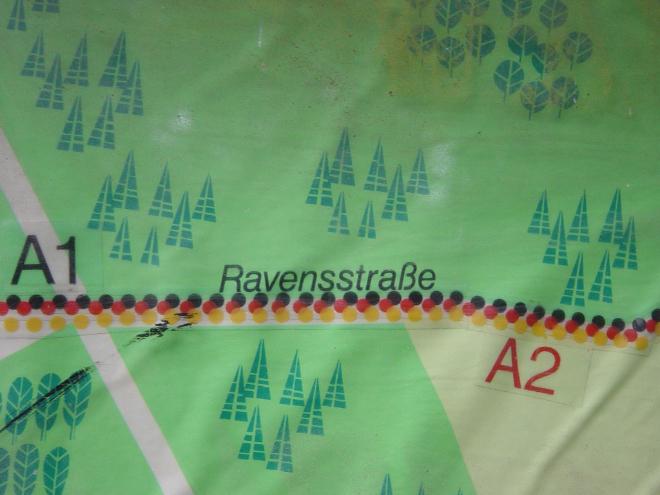 Frankly, what a journey Maalbeek is!!! Btw, Maalbeek is a forest located near the Dutch/German border, in the province of Limburg. I noticed Matthew Florianz for the first time back in 2010, when his Koude Handen album was announced. This recording also, unfortunately, marked Matthew's departure from releasing his music on physical formats. Strangely, it took me another 9 years before I was finally able to discover most of the CD discography (plus few limited CDr editions) by this gifted Dutch-Austrian soundscaper. Nearly 61 minutes long Maalbeek CD was released during February 2008 on H/S Recordings in a standard jewel case with 4-panel front insert and as far I know, this is the last album by Matthew Florianz released on a CD format. In the meantime another, at least 7-8 albums were released on digital formats with Mass Object being the last one (July 2019). In my ears, Matthew Florianz is a genius soundcarver standing shoulder to shoulder with the giants of the genre!!! Where the hell my ears were till 2019...